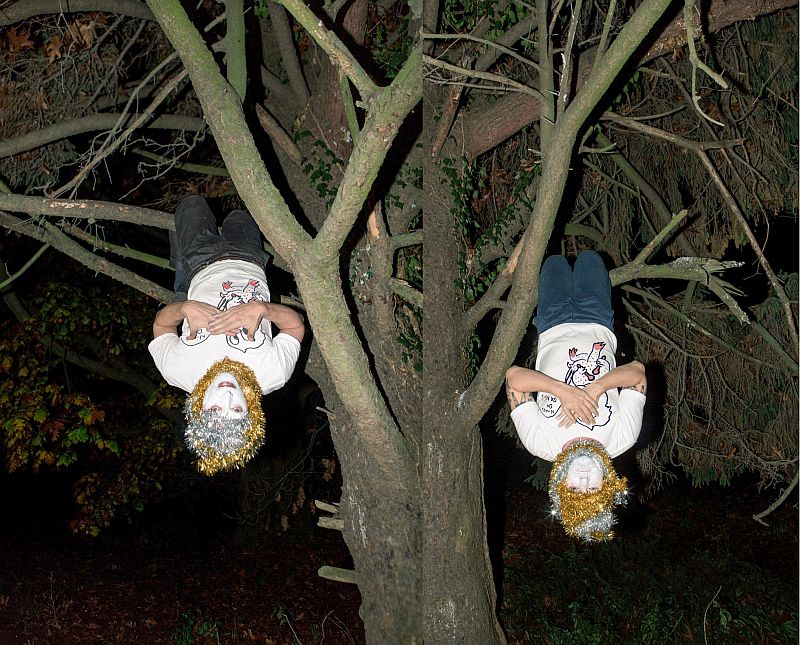 We are bringing Ninos Du Brasil to Vilnius. After their superb album Vida Eterna released on Hospital Productions in September we decided to share their wicked techno and post-punk batucadas with Lithuanian audience. For those, who are not familiar with Nico and Nicolò, here is the small interview what is going to happen on Saturday in Pelėda club Vilnius.

Nico Vascellari is answering our questions.

Vampire state techno. One of the adjectives how I try to describe your music, when people ask me about Ninos Du Brasil. Would that be correct? How do you describe your music for the new person whom you meet? Or no explanation is the best explanation?
We try our best to deliver something we believe it is unique, personal and original therefor we have invented “NDB sound” and “Another Kind Of Pop” to describe our sound.

Your shows are very energetic, vibrant and exploding. Is this energy is brought by your early punk age, or did you had to travel to Brasil to get this atmosphere?
Traveling to Brasil was necessary to study the music rather than the energy. I’m sure this search for energy is linked to our experience and activism in the underground movements but I’m also quite certain that it is also the reason why we have first approached the sounds and situations generated by them.

Is there any “state of mind” that you trying to enter before starting to play live show?
We try our best to be sober and focus on the idea of losing our shyness, dignity and education. The makeup and hat help a lot but it mostly come from our sound and playing the percussions in such primitive and repetitive way. 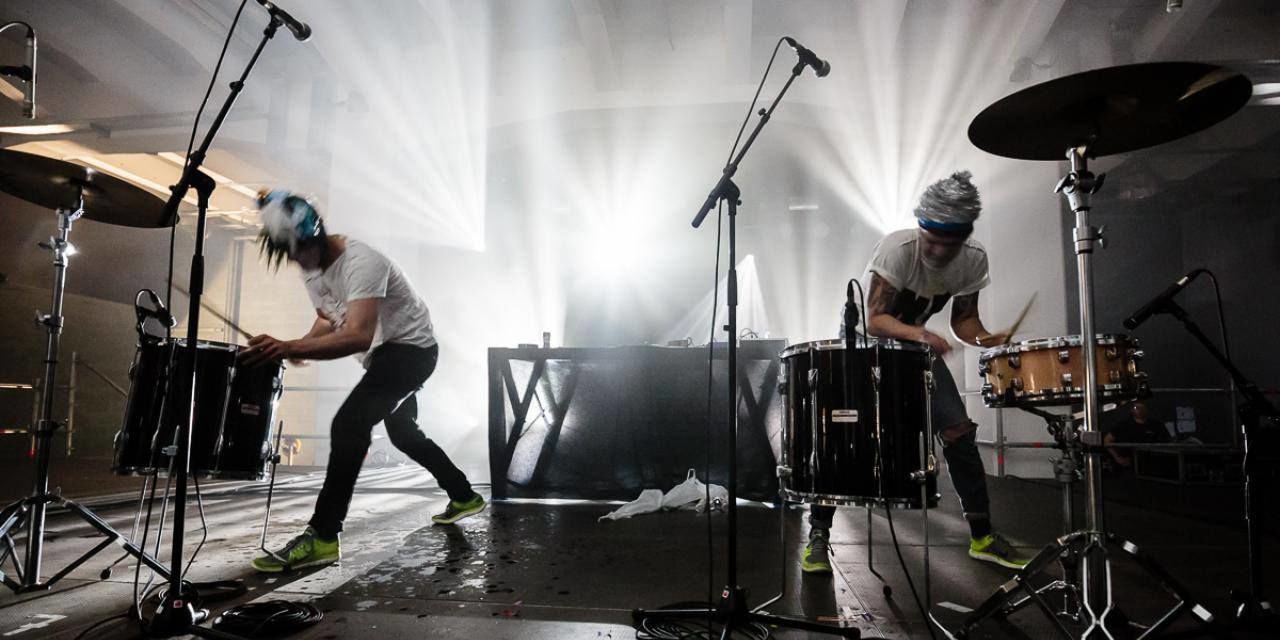 How much of the percentage do you improvise during the show, how much does it go “as planned”?
We improvise quite a lot at every show but as absurd as it might sound we are perfectionist and practiced quite a lot in order to present ourselves live so I would say that the “planned” part is a very consisting and relevant one.

Your music is very versatile. Next year you will be playing together with post-punk band The Soft Moon, the other time with straightforward techno representatives like Rrose. In which type of parties/events do you prefer to be positioned? More punk or more electronic?
As you suggested we are very versatile and enjoy all that comes with it. That feeling of “not belonging” just as much as “belonging” is very dear and precious to us. 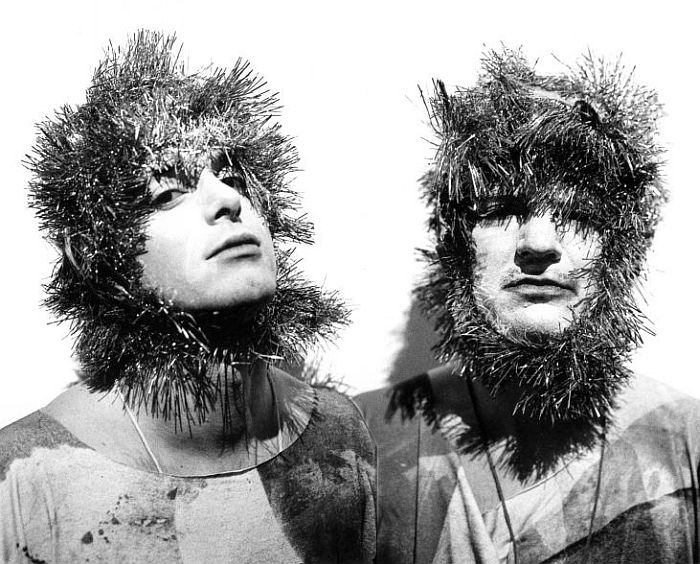 You gave interviews for Vogue, you play at Chanel, Karl Lagerfeld events. What is your opinion about haute couture fashion? Do you support it?
We are curious by nature and confrontational by attitude and therefore interested and motivated to present Ninos Du Brasil and deliver our NDB sound in different contexts. The world of fashion has been particularly interested and supportive towards what we are doing and we consider the experience of working with Chanel an honor and something to be proud of.

NDB travel around the world, what’s your most memorable event? The first that always blinks in your mind?
We are grateful for many incredible shows and places we were fortunate enough to visit because of the band. From last year for example we won’t surely forget the amazing time we had in Uganda when we have played Nyege Nyege Festival or Rio De Janeiro for Multiplicidade Festival. To go not too far from home the last three shows last year were in Sicily and they were all equally amazing and memorable. And, of course, the show at Chanel in Hamburg of which we have just talked.

What’s would be the most unexpected answer from NDB if we ask what kind of music do you like? Do you listen to any pop or strange music that brings much joy?
I wouldn’t truly be able to answer this question to be honest with you. We listened to a variety of sounds and I believe it truly shows in the way we write and perform our music.

In one interview in 2014 you said that “dancing meant moshing to us”. Do you still lean to this opinion? What dancing does mean to you now? Have you ever thought of joining dancing and your live performance for the special event?
When thinking of dancing we can’t avoid remembering the words of the great Michael Jackson: “you don’t have to think about the music, you have to feel it” which is strictly connected to the idea of losing control. Dancing is a cathartic and liberating action.

Many of artists move to Berlin, when their music starts to become more techno or more electronic. Does Italy suits you well? Have you ever thought of living somewhere else?
I have lived in New York, Rotterdam and Madrid in the past and spend a good amount of time in Paris and London. Nicolò is often in Berlin. That said we are both very connected to the small town and realities where we come from and we first had the luck to meet as young kids obsessed by the same kind of things.

Last track of Vida Eterna is with vocals from Arto Lindsay. Correct me if I’m wrong, but this is the only song, which involves other people in your music. What do you think about collaborations in NDB project overall? Is this is the hint, that we will see that more in the future?
This is the first external musical contribution but as Ninos Du Brasil we have collaborated many times with different artists. I’m thinking of the videos created by Carlos Casas or the artwork of our covers made by incredible artists such as Luigi Ontani, Marvin Gaye Chetwynd or Dominick Fernow. Collaboration is an important part of Ninos Du Brasil and we are considering a lot of different possibilities for the next album we are about to record.

Nico, your artwork was presented in such places like Biennale di Venezia, Marina Abramovic Institute, do you have any plans to work in this segment in 2018? Or do you focus on music mostly right now?
I consider Ninos Du Brasil an important part of my art practice and that is exactly why I’m able to dedicate so much time, concentration and energy to it. I have always continued to exhibit while playing with Ninos Du Brasil. In recent year I had solo shows in institutions such as Villa Medici (Rome), Whitworth Art Gallery (Manchester), Palais De Tokyo (Paris) and Estorick Collection (London) and I’m currently preparing a solo exhibition for Maxxi Museum in Rome to open in June this year. 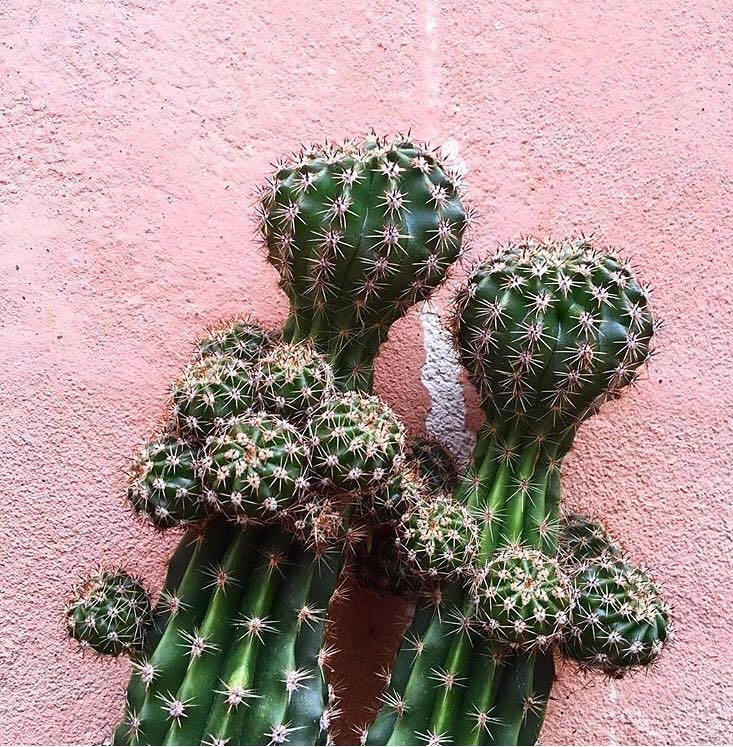 What would be your desired perfect show? Where it should be, at what time, how many people, for which people?
The perfect show is always the one in which “Nos Somos Ninos Du Brasil” (We are Ninos Du Brasil) doesn’t imply just the two of us on stage but each and every person in the audience. Where, what, how, which are irrelevant to us as long as everyone is aware that Ninos Du Brasil is a collective effort.

The drums are the key aspect of Ninos Du Brasil. What other instruments can you play?
We both play, in a way or another, electronics and that is still a vital aspect of the band. During live performances we have always preferred to focus on drums and percussions as a primitive and primordial way to link with the audience through ancestral experiences.

Both of you are also working as separate artists. Do you have plans to work as solo artists in the near future, or both of you will focus on the production of NDB mostly?
Actually Nicolò never worked as an artist. He is quite a famous pharmacist in Italy but he is right now mostly focusing on Ninos Du Brasil. As far as I’m concerned being an artist is a condition I’m an unable to escape profoundly connected to obsessions and visions and I’m currently working on many new works to be included in upcoming solo and group exhibitions.

Have you heard anything about Lithuania? Will this be your first time?
Yes, this will be our first time in Lithuania both as band and as individuals. We are very excited and grateful for this invitation and look forward to ride the night with you all. Unfortunately, we won’t have enough time to visit Šiauliai and its magic hill of crosses or walk through the forests but it is something I have intended to do since quite a long time so I’m certain I will do it sooner or later. 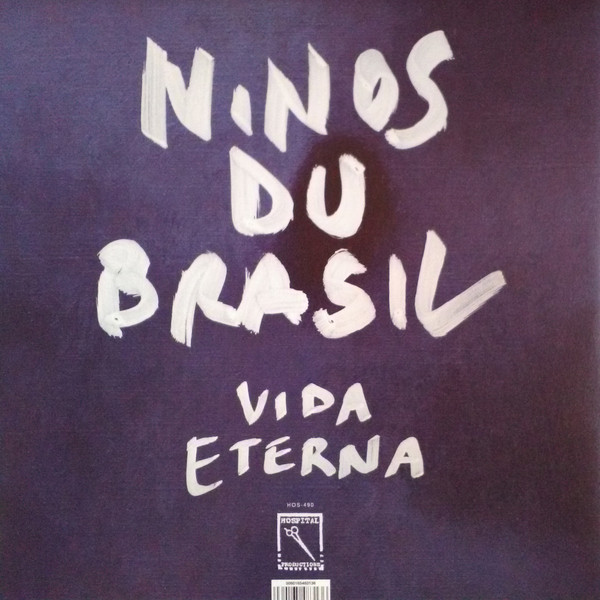 See you all on Pelėda dancefloor this Saturday. 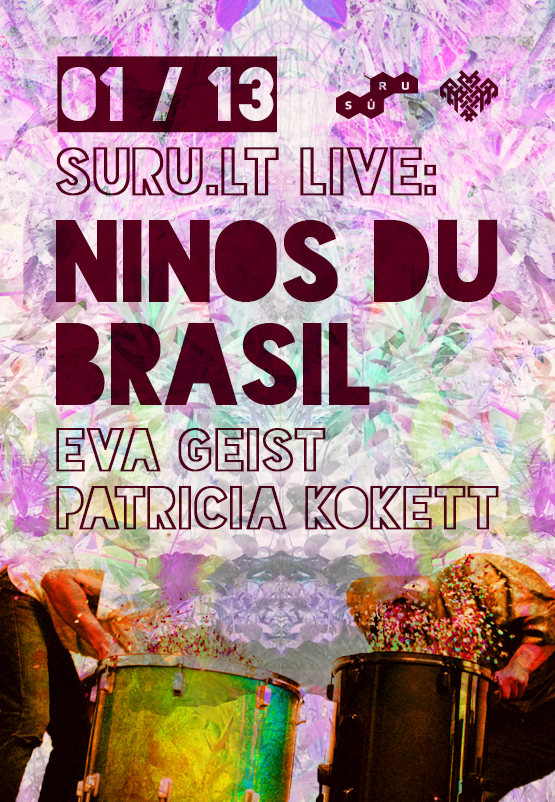 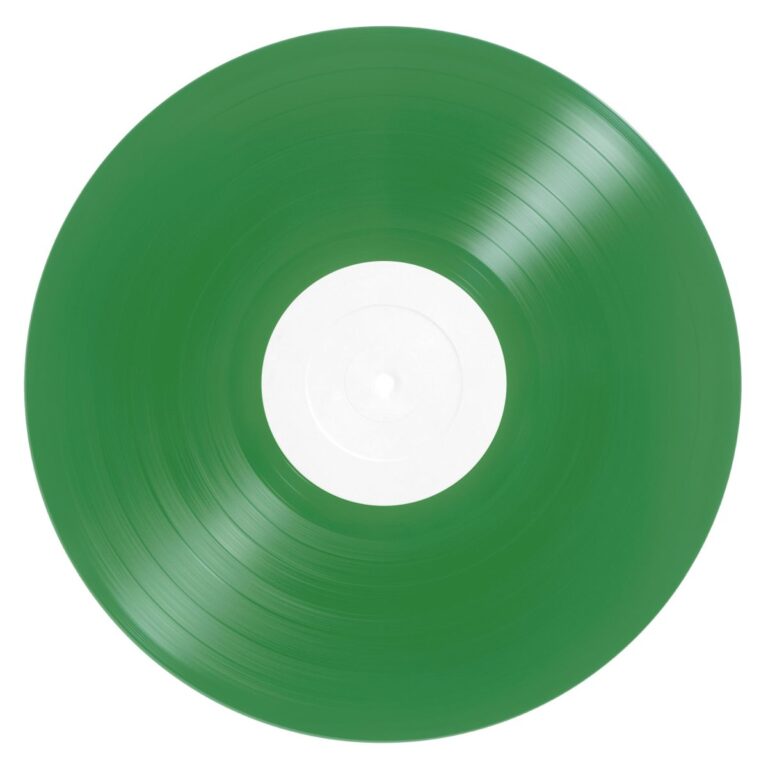 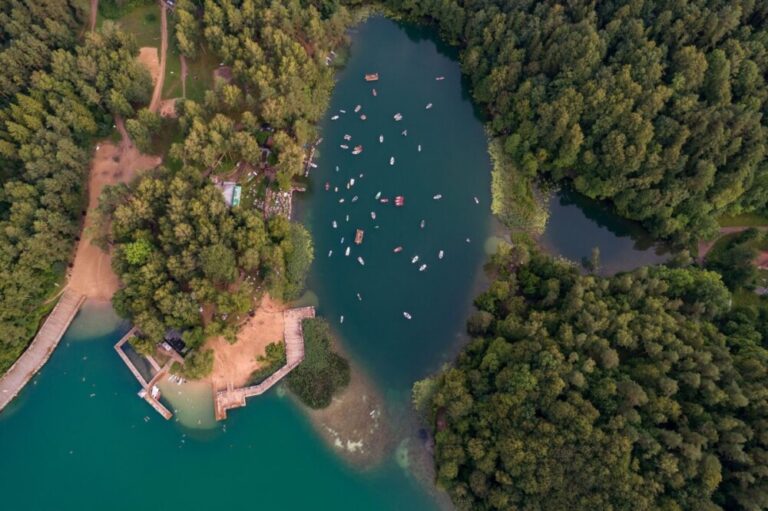 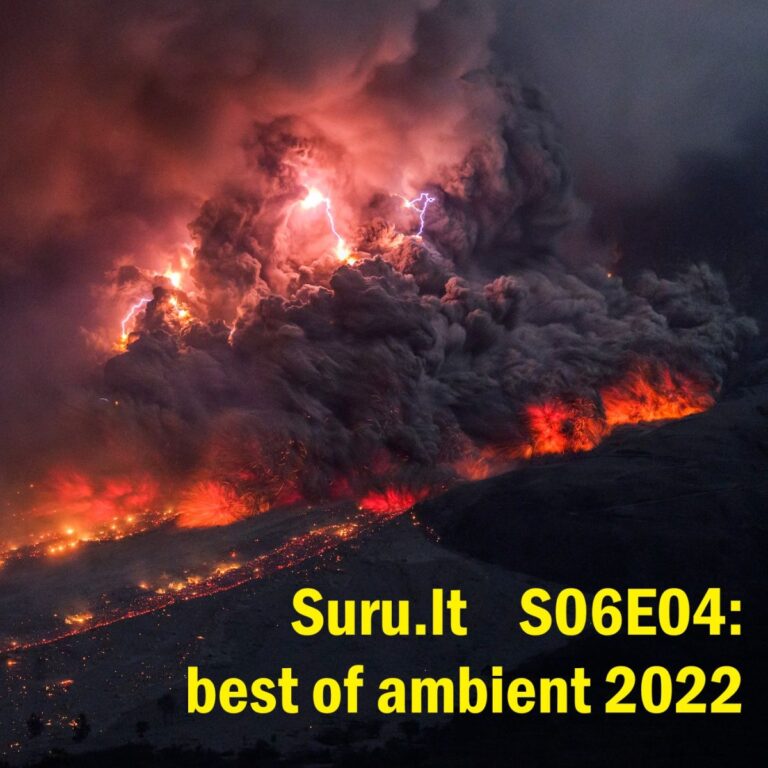